Paid Microtransactions: Why They Can Be A Huge Downside For New School Gaming! 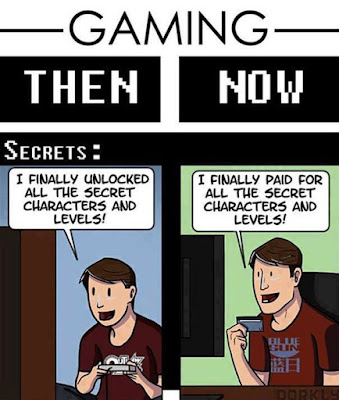 I remembered the time I got my hands on a Playstation 3 some time ago. While I didn't get it immediately when things are still new but I remembered a lot of stuff I got fascinated about. Online patching of video game glitches was definitely more convenient than having to endure the glitches through and through during the old school gaming days. Graphics have huge improvement, a lot of gameplay innovation from competent companies may make you never want to pick some of their old school games again (ex. You may have stopped playing the first game they released way back in the 90s)... you name it! While I was sad that there are no more cheat devices but it was nice to engage in competitive gaming. There was a huge feel of satisfaction like paying off Ludger's huge loan in Tales of Xillia 2. I never did anything like that way back when I was playing old school RPGs when cheat codes were still trendy.

But let's talk about one part of new school gaming that I dislike. It's all about the prevalence of paid microtransactions. I have nothing against downloadable content when it's free. Tekken Tag Tournament 2 had tons of free DLC that you could enjoy like the extra fighters. The only downside was that by not having to play through the game to get the bonus characters meant a little less satisfying feeling. But again, DLCs like new costumes that were not originally in the game can be fun when they're free. It's not that I can't afford to pay for secret characters, outfits and the like but I'll talk about why I think it's a downside.

It's really stupid that anybody bought the freaking game so why does anyone have to be paying for additional content rather than getting new content for free? I remembered when Mortal Kombat X first came out, I'm glad that Netherrealm wasn't able to fulfill their promise of releasing the PS3/XBox One versions because of that. It's good they decided to do massive refunds then they released Mortal Kombat XL just a year later after that unfortunate incident. It was so on your face saying, "Press (button) to purchase (insert character)." I agree with what Angry Joe had to say that it's really taking advice from Corporate Commander. I just feel that it's plain wrong to make people pay for more than the game's disk just for the sake of money.

What do you think about this downside of new school gaming? Are you willing to pay up cash for paid microtransactions for extra bonuses?
computer games