Satirical News: Kris Aquino Says She Will Negotiate For Ceasefire With The Matae Terrorists In Marawi 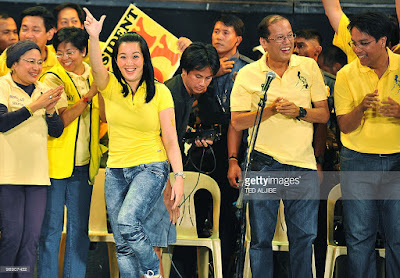 As Kris Aquino still does not have any timeslot, she finally admitted on an interview on ABiaS-CBn with Leah Navarro as the reporter. Kris said, "I believe that not having a timeslot on TV or not appearing in a Hollywood movie will be because I have a greater calling. I believe what Manang Loida says that I am the only hope for democracy. EDSA would have not been successful if it wasn't for her. To prove my worth as your future president I will go to Marawi to show martial law is not necessary. I can prove we can all have peace talks with the Matae terrorists."

Later, Kris had an interview with Maria Ressa of Crappler. She said, "The declaration of martial law in Mindanao is proof that the democracy my late mother fought for has died. Duterte himself is the new Marcos. The move to have a electoral recount is a death to democracy. If Bongbong Marcos becomes the new vice president then everything that the Liberal Party has fought for will be wasted. Everything from economic protectionism to protect local businesses to the removal of the anti-squatting law and a happy democracy will die out. That is why I will take the burden to negotiate peace in Marawi with the Matae terrorists. I will prove by my speaking power that I can bring peace to the Philippines to prove I should be president by 2022. I will restore democracy before it is dead and bring the Philippines to a golden age."

Kris mentioned that she will not be alone. Along who are planning to go with her are former president Nobita Aquino, Marbobo Roxas, Vice President Leni Loud Robredo, Cheato Gascon and Etta Rosales. They are also expecting Loida Nicolas Lewis, Dr. Agnes Callamard and Dr. Carl Hart to help them with the peace process with the Matae terrorists in Marawi. Others who are tentatively planning to help her are Agot Isidro, Cynthia Patay and Korina Sanchez.