Posted by Sean Akizuki on February 27, 2019
Not every main villain is that interesting isn't it? Well there are a couple of old school films that I would like to dig (and these are ADULT films) namely Robocop and later Darkman. I never dreamed that these movies were for adults because of a Robocop NES game and that awful Darkman NES game (way before the Mortal Kombat franchise forced the ratings board to come to life). Now I'd like to discuss about those secondary villains that were really way more interesting than the main villain. 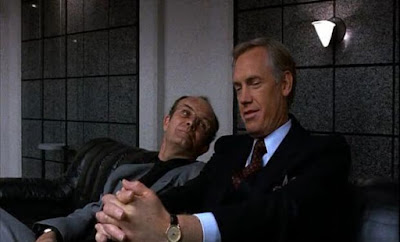 Robocop has the case of Clarence Boddicker working for OCP Senior President Dick Jones. Yes, Jones is the main villain but I thought he was flat out and boring. The only edge he seems to have is that he had lots of money and his alliance with Clarence Boddicker. Without which -- Jones would just be a sitting duck in the OCP company.

So what makes Boddicker way more interesting? He doesn't only get the most screen time but he's also responsible to why Alex Murphy ended up dead -- hence the event that led to the creation of Robocop! Whatever was left of Alex was put into Robocop. He was also the very reason why Jones is feared but he doesn't seem dependent on said employer either!


Hmmm with this in mind -- I thought about it how the people behind Janperson were actually smart enough to fire Jones before the show could even begin. Instead, we had Ryuzaburo Tatewaki as the Japanese version of Boddicker -- both are mentally unstable and cunning gang leaders who would do anything for power. Tatewaki has also been seen in Janperson as a ruthless gang leader and would later become the "Robocop 2" known as Bill Goldy -- a slimmer, sleeker version that would have probably owned Robocain due to his agility! 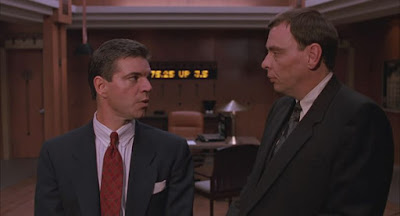 We would later have Sam Raimi's Darkman which is another adult superhero film. The parallelisms can be seen where one caused the hero to eventually get there while the other is the mastermind of the scene's events. The main villain is Louis Strack Jr. who practically betrayed his own family for wealth and power while the other is Durant who is somewhat cold and unfeeling towards almost everything.

Durant is sort of like Boddicker -- the toughest crook and public enemy number one to cause trouble around. One of his backers is Strack -- someone who appears to be a benevolent all around good guy but is actually one evil crook within. But what makes Durant more interesting? Again, if it wasn't for Durant -- the evil of Strack couldn't get it done, right? Not to mention, it was Durant who caused Darkman to be born to start with. The relationship between Darkman and Durant is way more personal than what Strack could've come up with!

The opening scene shows Durant himself may or may not actually need Strack to back him up. In fact, he could just get rid of Strack anytime! The beginning shows Durant torturing Eddie Black for simply not wanting to sell his property -- NOBODY messes with that guy! Durant could even have the choice of actually taking over Strack Enterprises if he wanted to -- just that, he probably intends to hang around Strack until their partnership will no longer be of convenience to him. In fact, I wanted to add poetic justice by making Durant murder Strack and becoming the show's final villain! Sadly, that never happened!

Then we have the rather mind-boggling scenario where Durant actually survives that helicopter crash. Okay, if the hero Darkman can survive all that injuries then I guess by Raimi's logic -- Durant can survive that horrible a crash for a direct to video sequel which had Arnold Vosloo replace Liam Neeson as said character! Durant finally wakes up after a 878-day or a 2.4 years coma (which is WTF) and decides to retake his territory. Hmmm... and other ones that don't go with Raimi's sequels have even gone as far as to revive him either as a cyborg or a Deadite (in Darkman vs. Army of Darkness) and made up the story that Strack was actually cremated.

Either way, I thought making Durant the main villain in the second movie was interesting. He was a combination of both brute force and cunning. Sure, Strack could put on a fight but I think Durant would still win it!
movies weird stuff